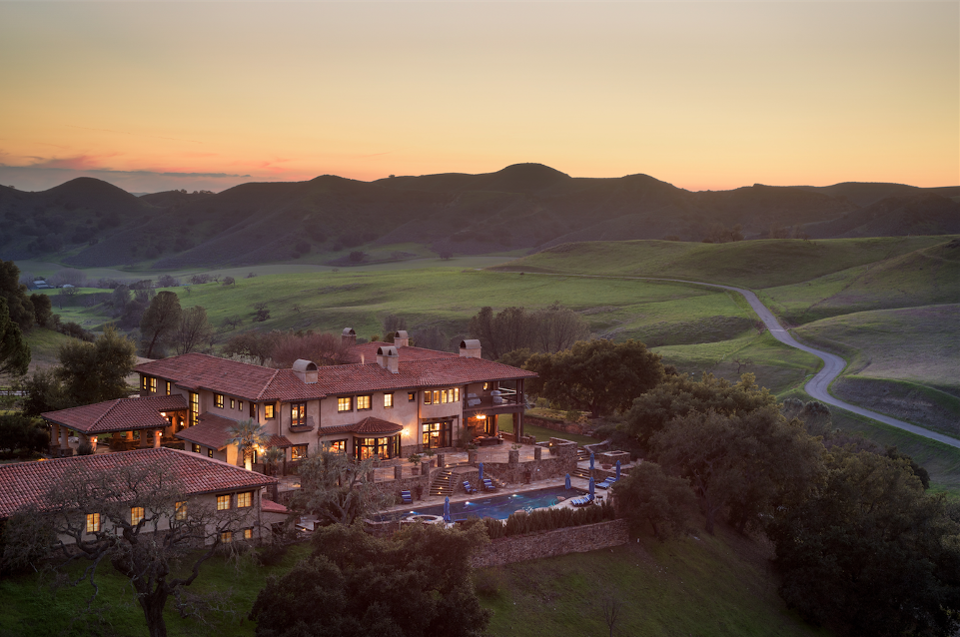 In the past, 24.5 million dollar Rancho Latigo was a Spanish style horse ranch, which had nearly double its price back in 2017. The spacious territory is an equestrian mansion that is located in Santa Ynez Valley. The rancho is 13 miles away from the Pop King Michael Jackson’s Neverland Valley Ranch. The property expands its boundaries over the picturesque scenery. The 4700 acres offer more than you’d expect. Guest rooms, helipad, extra size pool, horse trails in the equestrian territory – all of this around the magnificent main residence, which is a great place to enjoy your solitude.

The Western Vibe from Hollywood is Reflected in Each Square Meter of the 24.5 Million Dollar Rancho Latigo

The breathtaking estate is listed at Compass, by Aaron Kirman, Hillary Ryan and Neyshia Go. The place resembles the stages you’d see in Hollywood Westerns. Cowboys, cacti and horses are best fitting in its image. What is more, the location is not a plain valley, but a mountainous one. It was an area, where some famous movies like Sideways, Seabiscuit and It’s Complicated were shot. It had remarkable guests, like artists, musicians, lyricists and other celebrities step in. Perhaps the 24.5 million dollar rancho Latigo is quite special for them, as guests do not want to reveal their identity and be under the scopes of the curious fans and media upon their next visit.

In 1999 a rich Goldman Sachs partner purchased the estate and renovated it with wealthy amenities and it became a great entertainment afterwards. The previous owner of the rancho was Jean Claude Brouillet – the Frenchman who established National Airways in Gabon, Africa. Jean was a freedom fighter – it was his whole lifestyle. In fact, the 24.5 million rancho Latigo has had powerful influences since its earliest times and further modifications.

The main residence, which occupies a territory of 14,000 square meter in total, was designed by David Leavengood. Inside, you can find 6 bedrooms (en-suite), wooden panels that form the office, 9 bathrooms. a cinema, a vast wine cellar to store 10,000 bottles, gym and much more. The hand crafted professional job took 4 years to complete, ranging from 2003 to 2007. Leavengood’s architectural talent has been revealed in many ranch project of the past and of present. Local smiths were hired for the metal work, which proved to be a successful business.

The color scheme from  yellow to orange, brown and rustic has been a hue which completes the western look of the modern-touch equestrian palace. 24.5 million dollar Rancho Latigo has got huge fireplaces of stone, vast staircase, doors that are embraced by the arches, ceilings of metal and wood, where railroad bolts were used for fixtures, floors of hardwood and hillside panorama through the windows of each room inside the expensive living space.

The property’s look inside is simply astonishing with expensive furnishings decorated by the professional interior design specialists. White chairs breathe fresh air into each corner of the living space. Curtains of velvet and plants that remind you of sunny days are here too- just to distract you a bit from the sandy cowboy feel. Kitchen is a quiet space that has got beautiful panorama of the surrounding landscape through its windows. The library rack is there in the living room. French doors make your way to the courtyard veranda.

Colombian outdoors of the 18-19 centuries speak of classic interpretation of design, and the 24.5 million dollar Rancho Latigo represents the old-school ideology at its best. Moroccan stone fountain is one of the distinguishing decors of the eye-catching courtyard. Swimming pool, spa and mountainous vistas are in front of you. The guest house features 2 baths, high-tech kitchen and 3 bedrooms. The barn and riding area are a couple of walks away outside the rooms. The massive land is best travelled by horse ride.

24.5 million dollar rancho Latigo is a great hideaway for western-style lovers, and it will still amaze you with the harmony it has in assistance with high-end decoration of our days, even though its price has gone down since 2017.