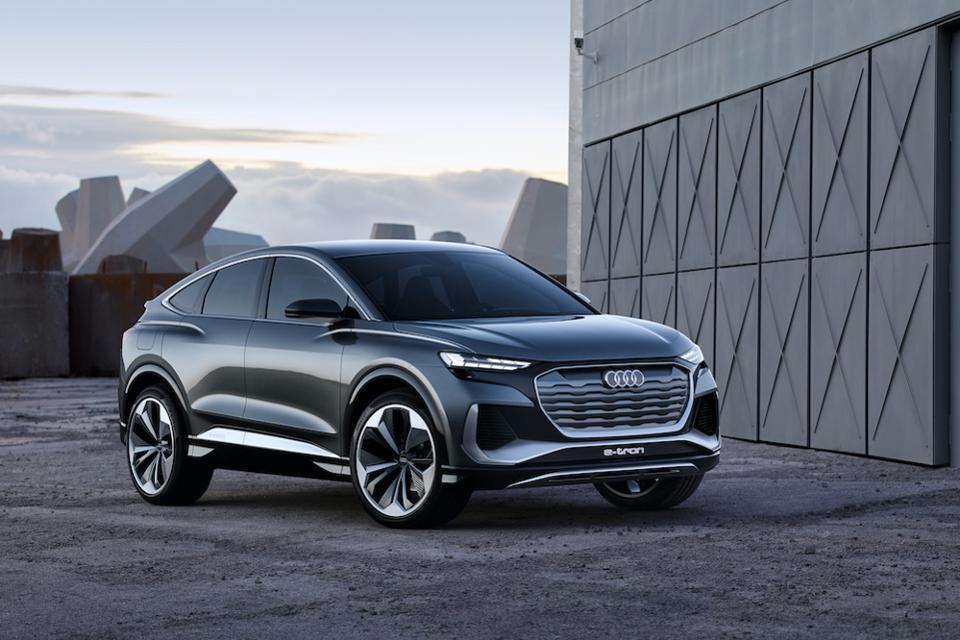 Audi Q4 Sportback coupe is the most recent of the concept cars that the brand has put on display. The whole team of Audi is excited about the possible release of this electric SUV, which, by their estimations, will take place no sooner than 2021. As it became obvious by the media releases, the car is an improved sibling of Q4 e-tron. The latter was one of the shiny vehicles by the German automobile manufacturer that debuted at the Geneva Motor Show in the past year.

The electric driving experience is brought to a whole new level thanks to Marc Lichte – the concept’s designer team leader. And, not to forget about the performance, the electric motor is supplied by Volkswagen family engines.

It has been quite a while that Audi presents e-tron vehicles constantly with innovative and creative thinking, which sometimes brings extraordinary solutions for the traditional ideology of the brand. A bright example is Audi Q4 Sportback coupe, which is a modified version of Q4. Car sale coverage targets need to be no less than 40% – at least, Audi plans so. The goal is to have 20 electric cars produced by 2025. There will certainly be a lot to admire, once the car maker successfully completes its goals for the nearest future. And they still inject some hope into collectors, that e-trons will range from urban machines to exclusive middle size cars, SUVs and many more.

There are a lot of similarities between the original Q4 and Audi Q4 Sportback coupe. First, their masses are the same. Second, they are nearly equally heavy. But the thing that distinguishes these both e-trons is the look of the top. Sportback is a coupe, so it should have a roof that is common in many coupe concepts. What is more, it looks sportier than any SUV coupe produced by Audi. The design of the spoiler creates an image, which manipulates the vision – making feel as if the vehicle is bigger. The visuals of the car are thrilling. With the rear lights made of LED joining together, the concept has got a symbolism of unity in its luxurious aura.

The signature cue of design, such as the single frame grille, will tell you even from a far distance, that this is an Audi e-tron. But Audi Q4 Sportback coupe hides the sensors now – a feature that is fresh with the brand’s cars. The battery packages do not take much space as they do in the salon of many similar vehicles. It is situated between the axles. Digital approach cannot be excluded from any corner of the salon. Virtual cockpit is the most eye-catching detail.

In fact, a great achievement was the interpretation of the Augmented Reality functions among e-trons of the present day. Eco-friendliness is also a huge contribution, as the floor inside is made of recycled materials, whereas seats are supported in alcantara. Metallic decorations are substituted with several layers of ecologically clean paint – a high quality addition that transforms the classic into futuristic.

E- SUVs have got different control methods when it comes to torque distribution to the axles. The electric control has replaced the mechanism that binds both of the rear and front axles together. And the four-wheel drive ensures the powerful pulling  of Audi Q4 Sportback coupe. The speed is not that spectacular – just 6.3 seconds from zero to 62 miles per hour. The maximum speed is 111 mph. Once you charge the car battery to the full, you can cover a distance of up to 279 miles. The range improvement was possible thanks to the complicated thermal control.