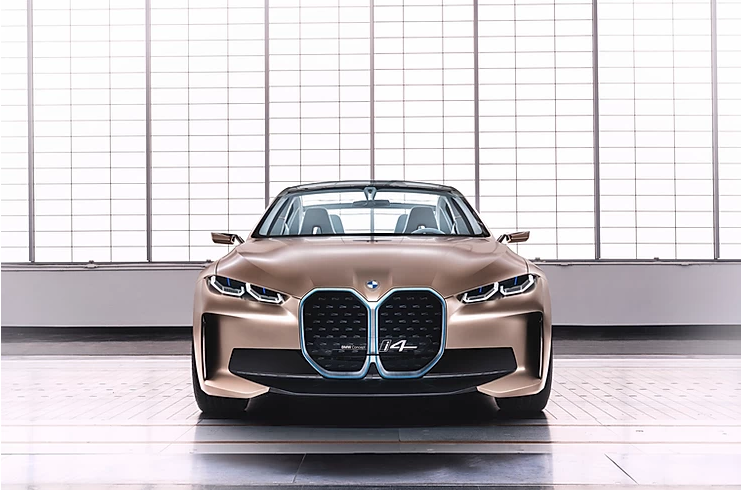 Every car collector can find something special about the craftsmanship of the German vehicle manufacturers. This especially refers to the renown BMW, which has a lot to offer in future, including the BMW i4 Concept.

What BMW suggests in the ride of its I4 Concept is elegance, smooth aerodynamic features and electric performance for a 4-door luxury car. The acceleration for an electric concept is quite impressive – 4 seconds are enough to reach 100km/h from zero movement. However, the top speed is not as good as one expects from a brand like BMW. The maximum range of 200km/h, on the other hand, is quite a match for city rides.

The sophisticated details of I4’s exterior in Frozen Bronze tone and black and white are echoes to modern design examples. Smooth edges on the roof melting into front and rear looks give a rounded shape when you have a glance from afar. The same approach in design and colors are characteristic to another model from the German car brand. Vision iNEXT has had a successful surface display, with similar touches. The car’s LED lights in blue form the calming nature of the car. Without them, I4 would have a more aggressive look.

The electric capabilities of the 4-door concept are improved with the assistance of well-designed aerodynamic grills and lightweight wheel rims. The car is still firm and strong enough, despite of its soft look. The impressive ride is not only something that the passengers and the driver enjoy, but also a bullet of admiration for those inspecting the car from outside. The science based panel of high-performance sensors on the front play a significant role. The back of BMW I4 Concept reminds that of coupe cars. However, the 4-seater has broad exhaust pipes in rectangular shape that are cut wider from one of its angles.

Inside the Luxurious Vehicle

BMW I4 Concept interior arrangement has an aim to let the driver take full control over all the amenities coming inside. Thus, the driver now is the conductor of the orchestra, featuring elements of optimization control via high-end screen sensor taps. The white to gray seats , the steering wheel and inner design of the doors provide a cool and calming look. The driver has control over the gear shift via non-traditional stick, but now several buttons that level up and down the speed. Bronze to copper panels are also found in the front from inside. Crystal glass comes on the doors and makes the cabin a brighter place.

The passengers on rear seats have enough room for their heads and legs, not to feel any discomfort while maintaining the sporty posture. The stitching is not extreme, thus the lounge-looking rear is clearer. User experience is an important aspect for the designer crew of BMW , that is why the innovative Curved Screen offers 3 modes – Sport, Efficient and Core.

The concept will be in production from 2021. The brand will start the first releases from Munich. A lot of investment has been made for the upcoming model, which equals to 200 million euros. Even though the pricing is unclear for now, BMW enthusiasts will surely be eager to spend whatever it takes for the opulent I4 Concept.