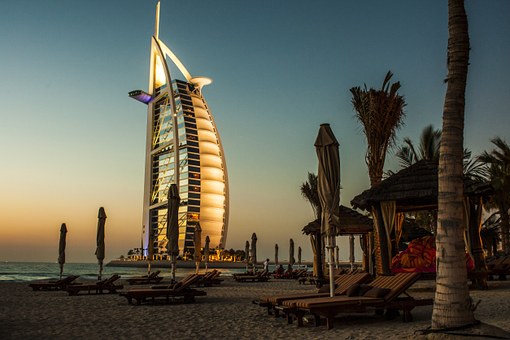 Do you dream of living at least a few days as a royal person in a luxurious apartment? All dreams come true in Dubai! World’s most luxurious hotel Burj al-Arab – seven star hotel, a truly royal holiday.

Eureka! The Sail on the Artificial Island :

Burj al-Arab, popularly called the Sail, is a luxurious seven-star hotel and, moreover, the most expensive in the world. It is built on an artificial island and is 280 meters away from the coast. This is the only 7-star hotel in the world and the tallest building – 321 meters, 60 floors.

Initially, they wanted to create it as a symbol of the city, so to say, a business card, such as the Eiffel Tower in Paris, the Weeping Wall in Jerusalem, the Statue of Liberty in New York or the Parliament Building in Budapest. The idea of a “sail hotel” to architect Tom Wright came up unexpectedly. Drinking beer at the bar, he saw a slowly sailing Dhow boat sailing into the sea.

“Eureka! Here is a simple and recognizable form that even a child can draw!” exclaimed Tom. Thus, after some time, a huge and capacious “boat” was built right in the sea.

Rare varieties of marble, furniture made of fine wood, golden frames, stairs, chic carpets, labyrinth corridors, restaurants, pools, expensive fountains, gold trim and genuine works of art – all this can be seen on the way to your room. About 8,000 square meters of 22-carat gold leaf was used in the interior of the Bourges al-Arab.

The world’s most luxurious hotel offers its guests 6 restaurants and 2 bars, 7 modernly equipped conference rooms, a multifunctional Al Falak ballroom with a golden dome, an amphitheater, 2 pools, and the Sinbad’s Kid’s Club. The hotel gives an unforgettable fabulous holiday in an atmosphere of luxury and bliss.

Guess how much a room in Burj Al Arab is? Previously, in order to settle in one of the hotel rooms, it was necessary to book rooms a few months before arrival. But with the onset of the economic crisis, the number of applicants decreased.

And the most expensive room in the world’s most luxurious hotel is 28,000 dollars. Of course, not everyone can afford such a luxurious vacation, but those who still decide to go there will not regret it and will remember this journey for life, and maybe longer!

Read also: The Most Expensive Hotel Suites in the World.

An illusion or reality? The golden paradise inside of the Burj Al Arab Hotel

At the very entrance to the hotel, there is a staircase fountain that from time to time “plays” with visitors and sprays water in different directions. A little further, you can get into the heart of the hotel – the lobby, the height of which is a whopping 180 meters.

If you lift your head up, you can see the unearthly beauty “kaleidoscope of floors.” There are no boring long dark corridors on the floors. On the one hand there are entrance doors of the rooms, and on the other hand, there are no walls and a gorgeous view opens up in the lobby of an expensive hotel.

On each floor, there is a reception and concierge. All 202 rooms – two-story suites. Beauty and chic are all that can be said about this most expensive hotel. The most ordinary room is 170 square meters, and the most luxurious – as much as 780 square meters!

A helipad and a tennis court in the hotel Burj Al Arab. Almost at the very top of Burj al-Arab is a helipad, which, if necessary, turns into a tennis court. Cunningly done! Would you like to play tennis at a height of 200 meters or get to the hotel from a helicopter?

Dinner in the sky or under the sea? Soaring and Diving Restaurants – Burj al-Arab

On the other side of the helipad is the highest restaurant, Al Muntaha which literally “hovers” over the bay. Al Mahara is a seafood restaurant located under the water. Everyone is brought here by submarine. The tables in it are located around a huge round aquarium. There is also a cafe-restaurant Bab Al Yam (Gateway to the Sea). And the restaurant Juna lounge (Eye of the sun). A variety of goodies, excellent cuisine, as well as 3 outdoor and 2 indoor pools. Everything is organized here so that vacationers feel comfortable and spend time as varied as possible.

Make new memories in the amazing city of luxury.

Are you ready for this kind of adventure in the world’s most luxurious hotel?