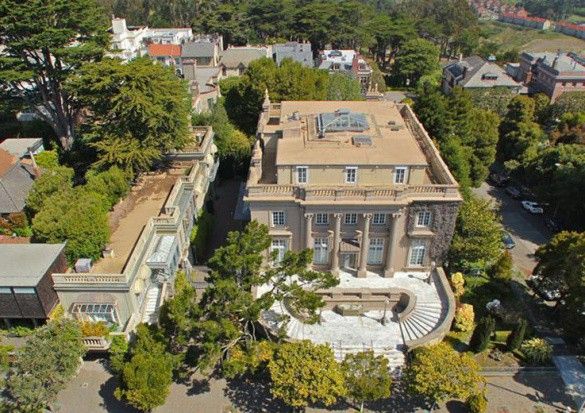 Le Petit Trianon, a French architecture example recently went on sale in San Francisco through Joel Goodrich. The construction took place from 1902 to 1904. It is an iconic  building that was inspired from France’s Versailles Palace. The latter dates back to 1763, when King Louis XV started the construction and it was ready in 1768.

$21.8 million Le Petit Trianon has got the facade -one of the famous images  around the world,which is regarded as a true masterpiece. It became a national historical landmark as well as a pride of San Francisco –  welcoming the most important events in the history of the area. The building is separated into some levels where everybody can find something highly attractive.

The main level of French architecture inspired Le Petit Trianon is held by 6 Ionic columns that rise high from the marble floor. The frame of the walls contains marbles too. French doors that are rounded lead you to the garden  in 4 directions. Domed ceiling Is a distinctive feature found in this area. There is a lot to discover as you walk through these doors and appear in the atmosphere of the luxury  concepts of the past.  The 3-floor central atrium wears on a decorative glass, while Doric columns surround it –  again, assisted with solid marbles. This spacious place speaks of symmetry and extravagance.

Attention to detail in French architecture is reflected in the grand living room of $21.8 million Le Petit Trianon , where the contrast with modern design is still maintained. Corinthian columns are guided by the contemporary lightning- assisted with beamed ceilings. This is the point where the past meets the present. Vast windows support the look to the gardens dazzling in the green.

The same beam ceilings are also found in the family room which is an inspiration from Pierre Berge design. Silk insets are there with a baronial fireplace. Moroccan tile can be found  around the latter. The woodwork is confronted with modern metal racks. The inlet of the light is enough to feel warm in the huge dining room. High-end kitchen of the Chef also includes marble touches. Another fireplace is located in the library of the French architecture inspired Le Petit Trianon, which stands out in the south-eastern part of the historic area. Herringbone patterns are an eye-catching appliance to the parquetted floor.

Head to the Southwest, and  discover the sitting room, where the height of the ceiling is the characteristic future along with double French windows. Here marbles are even on the staircase, leading to the higher 2 levels. Between the first and second floors to look at the atrium opens up the  overall beauty of the space. If you want to appear in the lower level the winding staircase is there for you.

The Lower Level in Le Petit Trianon of French Architecture

In the past the lower-level looked like a Versailles ballroom.  However, in our modern days it has been transformed into a nightclub. Color scheme assisted with 3D molding is an essential part of the atmosphere of the place. Like luxurious nightclubs, here  you can taste plenty of spirits, straight from the bar, where 3 beverage fridges can be noticed. One of them only contains wines. The area can serve for both large gatherings, as well as private meetings in French architecture inspired Le Petit Trianon. Fossil stone flooring along with marbles is there in the catering kitchen.

The look from above makes it look like a diamond-checkered style. 2 fridges, 2 double ovens, 2 sinks and dishwashers serve as the main amenities. You can take your seat  not far from the kitchen and enjoy your lounge time with the views on the garden. There is a massive butler’s pantry nearby too.

In case you have guests that are going to stay longer here, the bedroom suit with bath is just under your nose. Within this territory the large room, where forced air heating is performed,  stands next to transiting foyer. The still and wood mixture is attractive enough in this part of the property too. Just like the previous areas ofLe Petit Trianon you have access to the garden, which can be refreshed by moving in some French architecture inspired sculptures for a more entertaining display.