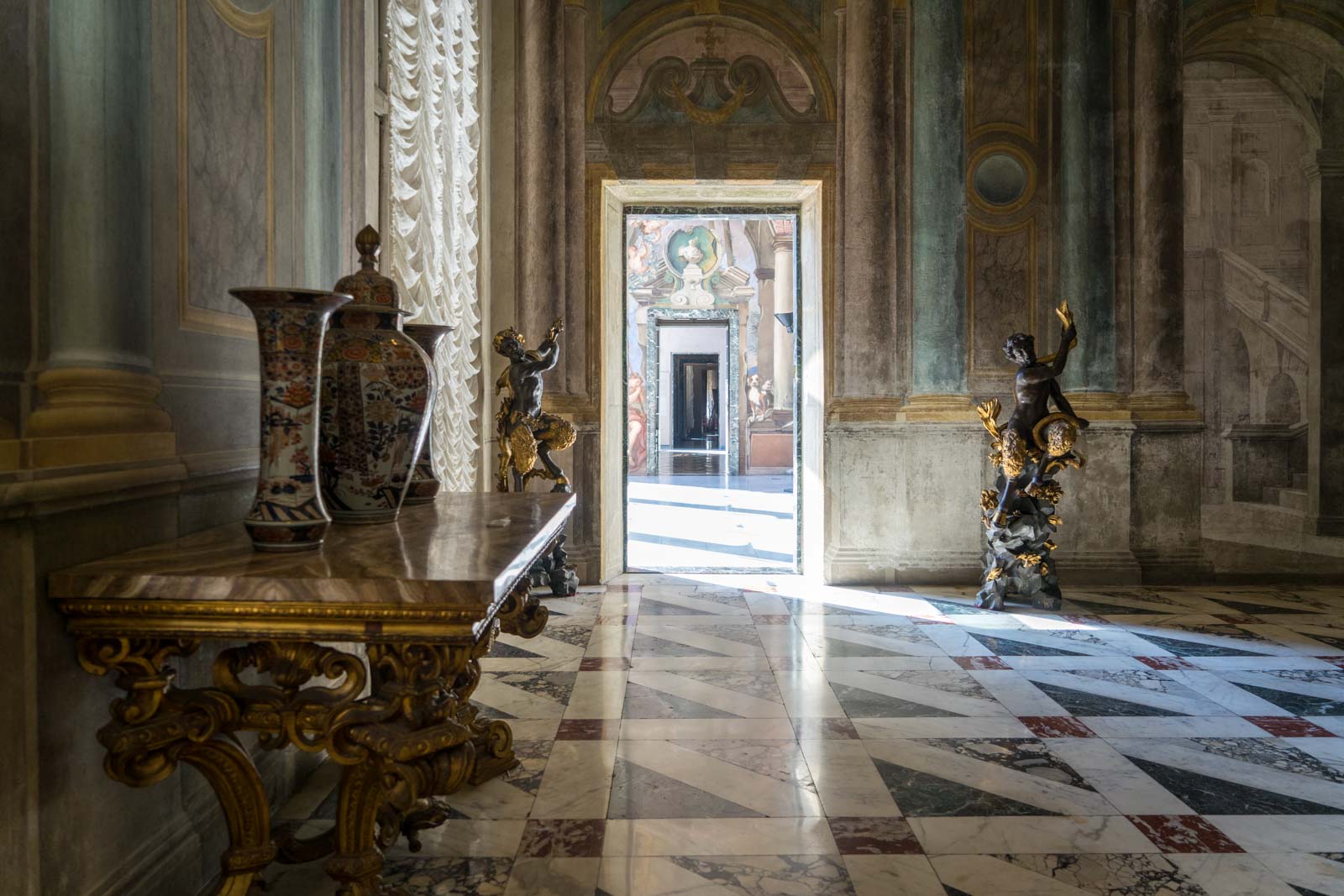 Few people know that there are more than a hundred Italian Luxury Palaces in  Genoa. They were built in the XVI-XVII century when the main treasures of the world passed through the main port of the Mediterranean. The palaces are hiding behind the modest facades, because in Genoa it was not customary to flaunt wealth. It’s not yet possible to watch the most luxurious coastal interiors live, but from May 16 to May 23, traditional open door days will be held online. 12 palaces participate in the digital campaign, and four of them will be opened for visitors for the first time. So read the material and travel virtually.

There is a saying that gold is born in America, passes through Spain, and dies in Genoa… The port of Genoa in the XVI century was so rich that it credited all of Europe, it was here that the first bank appeared (the building of the Palazzo San Giorgio in the Old Port). But Genoa never declared its luxury loudly, so as not to create social conflicts, to preserve wealth and power, and it succeeded. In Genoa, as in Venice, the Doges ruled. The first Doge was elected in the XIV century, the system existed until the beginning of the XX century.

The Genoese aristocracy furnished their houses with the best interior items, invited artists and architects to create frescoes, internal gardens and fountains. In 1576, all such buildings, according to a special decree of the Senate of the Genoese Republic, were included in the general list, the so-called “Rolls of public housing.”

The owners of Italian luxury palaces were obliged to host the guests of the Genoese Republic (a kind of analogue of Airbnb). The palaces have always been privately owned, descendants of the families of the first owners still live in them, or the premises are rented out. Some have banks and offices, while a total of 42 buildings are on UNESCO’s heritage list.

How to See Inside The Palace?

Twice a year, the city municipality negotiates with the owners of the palaces so that they let tourists in absolutely free. This promotion is called Rollie Days. In 2020, it is scheduled for October 10-11. But one hundred palaces never open at the same time, 30-40 buildings participate in the action, each year they are different. Tourists from all over Europe come to Roll Days. In the fall of 2019, the number of visitors in two days amounted to 130 thousand people!

The main street of Italian luxury palaces is Garibaldi. The most luxurious palaces are located here. Here the most senior guests of the Genoese republic were hosted. The farther from it, the lower the rank of housing.

Open year round as a museum complex of Strada Nuovo. Red and White palaces are opposite each other. From the White Palace there is a passage to Tursi Palace. The halls contain a collection of Flemish and Italian paintings – paintings by Rubens, Van Dyck, Veronese, Caravaggio, Guido Reni, leading masters of the Genoese school.

The Tursi Palace has a numismatic collection, porcelain and Paganini’s favorite violin. The halls of the palaces are frescoed and decorated with antique furniture. The White Palace has a luxurious inner garden, while the Red Palace has a roof top with an observation deck overlooking the entire city. The last floors are interiors of the past.

And when they are not, sometimes tourists are allowed. You may be asked to go in and take a photo. The Golden Gallery (La Galleria Dorata) is an office completely covered with stucco, mirrors, murals, sculptures. Rococo style reminds French palaces. There are luxurious doors and a mirror table.

The Palazzo Lomellino is distinguished by the sky-blue color of the facade and an unusual fountain. It is curious that part of the palace is still inhabited. The stalactite fountain is the facade of a two-story internal garden. An exhibition gallery is open on one floor, its main asset is the ceiling with frescoes about Columbus’s journey.

They were hidden from prying eyes for 300 years, almost immediately after creation. Only in 2002, an American researcher discovered the work of Bernardo Strozzi of the XVII century under suspended ceilings. In total, five halls are painted, but the latter are not finished. The frescoes have a scandalous story – the artist was not paid. That is why this work was not present in any directories. At the beginning of the 20th century, there was an antique storehouse in these rooms, which saved the frescoes.

Palazzo della Meridiana in The List of Italian Luxury Palaces

This palace began to be built in 1493. The interior halls and halls are decorated with luxurious frescoes. Some rooms open as exhibition halls where you can appreciate the decoration of the palace.

The Palazzo Reale Museum, or Royal Palace, was the “summer house” of the Savoy kings. It preserved the decoration of those times. At normal times, one floor is open for visitors. You can walk through the halls of the palace more than once. They are very different, there is a mirrored gallery. In fine weather, the upper terrace overlooks the port. The palace has a large-scale courtyard. The streets in Genoa are narrow, and at first glance it is impossible to estimate the size of the building.

An underrated palace with a secret garden and free access to it. The palace is located next to the train station behind a completely unprepossessing, most ordinary wall, which is the border of the garden. Inside, a peacock walks, a fountain with Neptune, a beautiful view of the sea. In the palace itself there are frescoes, tapestries and interiors of the 16th century.

This prestigious palace was built in 1545. He hid in the maze of the historic streets of Genoa near the sea. This is the only palace on the territory of which the hotel is open, so you can feel like a noble guest of the 16th century Genoa, who is warmly received in the luxurious apartments of the Rolly list palaces. The reception area and hall are decorated with 16th-century frescoes that tell of episodes of the Iliad and ancient Greek mythology.

A monumental staircase at the entrance leads to a luxurious lounge on the second floor, open to hotel guests. It has several wall-mounted frescoes and a view of the church of Santa Maria del Vigne. The deluxe rooms and corridors of this palace-hotel meet historic vaulted ceilings, frescoes, and small niches. During a recent reconstruction on the second floor, a mural was discovered that has not yet been studied! It dates from around the 18th century. Off season, the single room can stay for € 80 per night.

Discover another piece of luxury here .