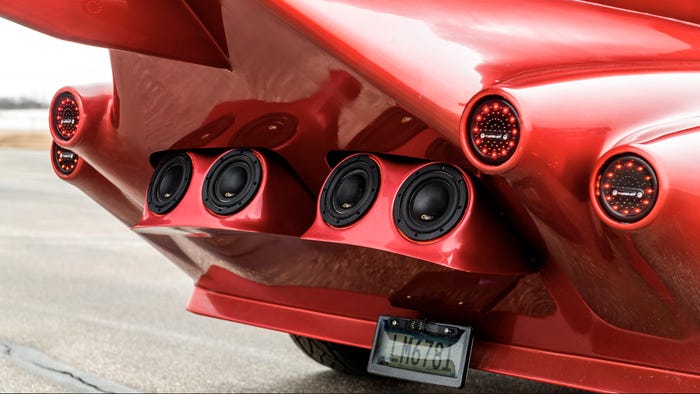 Limo Jet Concept is a Vehicle of an Impressive Design

When you want to be creative enough in production of expensive properties, most of the time you need to be clever enough to link things together in an highly-detailed way. This was the idea behind the creation of Limo Jet. The author behind this jaw-dropping jet-car concept is Dan Harris – Oregonian engineer, who collaborated with Exotic Coach company and gave birth to an astonishing model of vehicle, which is one of a kind. Exotic Coach is a renown distributor, with its limo varieties like Hummer limousine and the Learmousine. The latter has found its place in Mecum auction. We decided to have a look into more of its mesmerizing characteristics.

The time and effort put into the creation and development of this entertaining concept is too valuable over 40,000 hours were dedicated to produce a brilliance like Limo Jet. The luxurious Limo Jet is set to appear in auction block, if the pre-estimated event start is this year’s June. You might expect it to have some plane-like features and performance, but as it is made solely for ground travels, 400hp engine might still be a decent motor, that was created in resemblance with a truck engine.

There are 18 seats inside the opulent Limo, that are carried inside the salon, where people can enjoy watching a smart TV of 42 inches. The wheels of the jet-like vehicle are massive too. The audio system includes a ridiculously high volume performance.

The cabin for the driver had to be fully functional, and only a custom frame of steel could deliver the comfort for the person at the steering wheel. But even though the front window doesn’t let the driver inspect upcoming corners perfectly, there are still cameras that show it on 4 screens inside the front cabin. The ceiling on the other hand has controllable functions like those in a real airplane.

Engine roar is performed with HQ high DB speakers. The tail which seems to uncomfortable for street rides can be folded not to scratch the exterior of it. Once you situate yourself inside, a dazzling light effect shining in the dark will open up the minibar-looking space with the dominant color of red. Infinity floor is another superb design touch from the Exotic Coach, that falls in front of the leather seats of Limo jet.

Every time, Mecum auctions are held in different states and cities throughout the US. There have been more than thousand cars at the Mecum events. Glendale was the first to welcome bidders and auction-enthusiasts last year for their very first event. Mecum puts on sale both cars and motorcycles, and there is actually a wide variety of vehicles, including spectacular pickups and powerful trucks too. Their next 600 car auction will be held in Denver, and even though people are still in lockdown, there is a chance that it will warmly welcome lots of curious fans from Friday July 10th to Saturday July 11th.