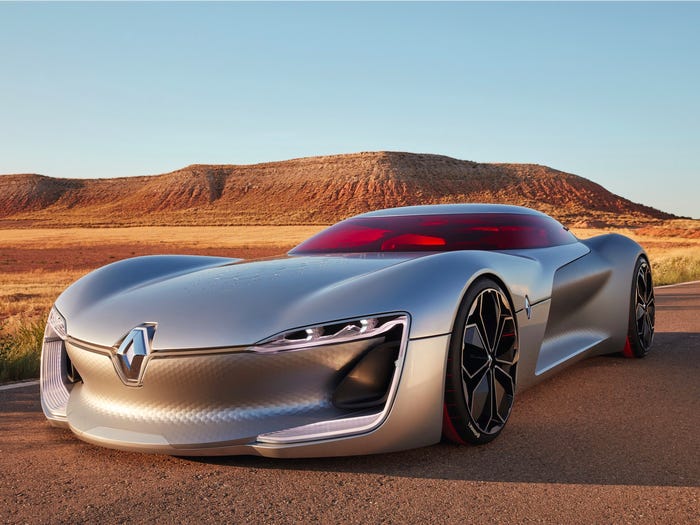 Renault Trezor Concept is a Coupe Car with an Exciting Design

Renault Trezor concept is a coupe car whose owner appreciates innovation, technologies and the modern look that today’s car manufacturing giants offer in the market of infinite varieties. When you think of a beautiful supercar, many examples come to your mind. But what really stands out with its cool characteristics is Trezor. In the row of electric cars, debuted back in 2016 the vehicle took the award of the most beautiful concept car several months later – during Festival Automobile International of the year 2017. Is it the blood-red interior, or the shiny silver exterior, that makes the car attractive from afar? All that combined with its characteristics truly state a new level of car models.

It was nearly 10 years ago, when the specialists and fans of the motor industry got acquainted with a breathtaking model of car by Renault with the name of Dezir . Dezir bore an ideology of Life, Emotion and Passion. It also had an electric engine and high-tech salon. Now the same design gene is injected into the improved model – Renault Trezor Concept. Many expected that by the year of 2020 Trezors would be in the market, whichever price the producer asks for. But the system engraved inside the car will certainly have a lot to surprise with. An example is its high-tech hands-free drive mode, which will come in handy from time to time.

With its appearance, Trezor is sporty. That’s the first thing you notice from its low and broad look. The seats are pushed back, so that there is more a feel of a sports car, than just a concept that looks good. It is 42.5 inches tall and for its proportion and drag features make it a worthy example of efficiency in its aerodynamics. Grills also play a huge part in the air circulation throughout the concept car. And the signature style of the exterior is its honeycomb air inlet starting from the hood to the rear.

As with its front design- the team decided to give its mouth a shape of the letter “C” while stretching it parallel from both right and left, elongating the hood a little more. The power under the latter is a consistent 350hp and the torque of 380 Nm. For an electric car, reaching from zero to 100km in 4 seconds is not a bad result. The braking system of regeneration of Renault Trezor Concept will also be a part of the upcoming models by the French manufacturer. The recharging now will be required a bit later because of the RESS system with power storage.

With the driving modes of 3, the car is capable of performing due to your needs. First mode is the neutral, which is slower than the second- sport mode. The excitement adds up when you switch it to its final – autonomous mode. During this last mode, you let the car move itself and not worry about the safety. What is more, the famous multi-sense system of the brand not only controls the movement of the vehicle, but also enables alteration of the lightning inside the gorgeous salon. LED system with the warm lines all over the model give it a distinctive look.

You can see the charge level indicator on the analogue gauge at the left side. The respective batteries are located both in the front and at the rear. This equal distribution of weight enables a better performance. Unlike the previous concept – Dezir, now you have to step into the salon through canopy doors that lift up. The front of the passenger seat is spacious enough to keep your luggage in the container there.

Red is the color of the interior, while the cozy seats look like mini couches. L-shaped smart screen is at the centre is on the dashboard made of a redwood. There is even a special slot for placing your phone there. The steering wheel is near to rectangular shape. What is more, it expands when the autonomous mode is enabled. The rear lights activate too, when you are in the salon driving it hands-free.